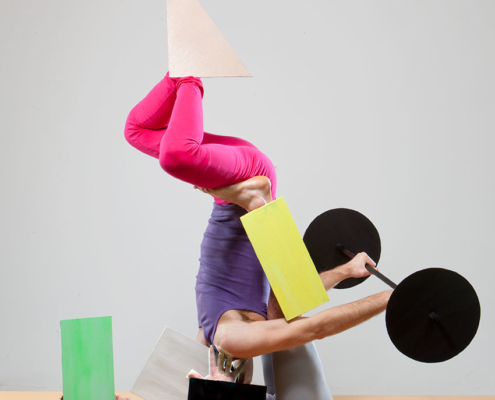 ‘This photo belongs to a series of performative photographs that are realized in studio setting or as live performances in connection to an event: The performers have basic geometrical shapes attached to their bodies which affects the movement and shape of the body and together they become some kind of Bodily dance machine: the shapes regulate the body, forcing it to make certain movements and It is not really clear if it is the body or the shapes attached to the body who is in charge of the choreography.

Kristine Hymøller’s investigation concerns the way in which we relate to constructional space as a system supporting power, beauty and wealth. Her sculptural work is often built on a range of visual and symbolic models, borrowing from the formal language and color composition of Bauhaus and Constructivism. Recently, Kristine applies performative elements to explore the physical space occupied by the body. In her photo series Abs-Six-Pack (2009), Twosome (2009), are free-moving construction of performers combine wood boards in different compositions, questioning the extent in which personal space is technically conditioned. Daniella Apice. Apice for artists, Amsterdam, NL

Want to join the discussion?
Feel free to contribute!